Direct Memory Access is a way for the CPU to offload the work of data transfers either to or from a peripheral to an external module that can take care of the transfer in the background and let the CPU know when it's done.
DMA is, in my opinion, one of the most powerful things found on microcontrollers and a big differentiator between them. But how does it work and why would I want to use it?

In my LCD example I was sending an image of Tux to the LCD. What if I now want to expand that to read frames from an SD card and blit them to the LCD? As per my example, I'd do this:

Let's expand this example to an actual LCD sized frame, 320 x 240 at 30 fps. This is 320 x 240 x 2 x 30 = 4,608,000 bytes per second to read and send to the LCD. Currently, even running the SD card at 50MHz I only get about 3.3MB/s reading, so this would be impossible. How could we speed this up? Well, the slow part is the SD code, the writing to the LCD is actually quite fast. So what I want is some way to spend less CPU time sending data to the LCD and devote more CPU time to reading from the SD card. In effect, I want some way to send the data to the LCD that doesn't involve me waiting around in a for loop. Well, that's what the DMA module can do for us. It can read and write from peripherals or ports in the background without using any CPU time, which means we are free to do other tasks, like reading from an SD card, while it is busy.

Let's take a look at the official block diagram of the DMA controller (click on it for an enlarged view): 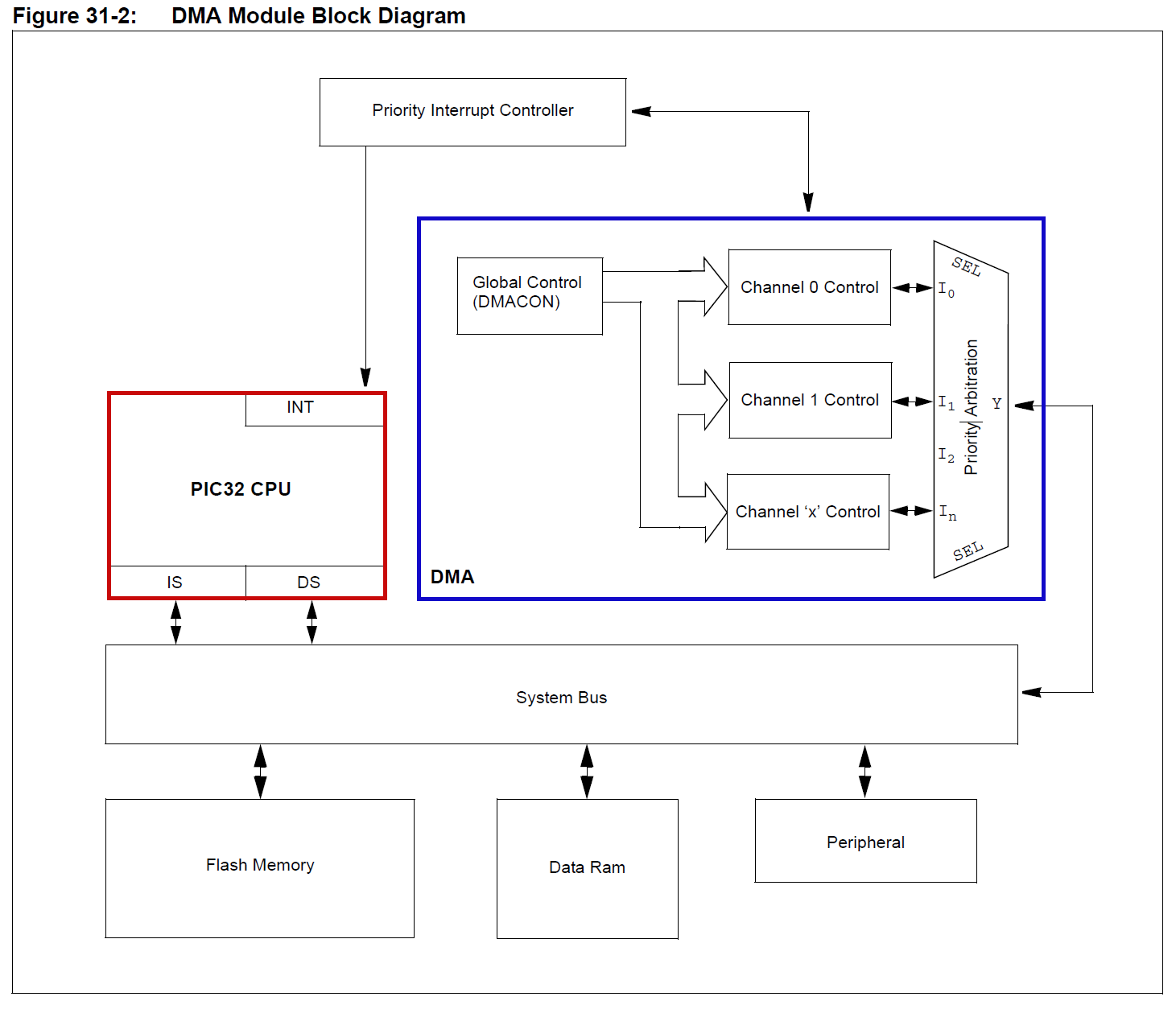 From the diagram you can see that the CPU and the DMA module are separate. The CPU can give the DMA module an instruction, like "Send the data in the frame array to the PMP module" and then DMA module will start doing that immediately. This instruction to the DMA module only takes a few lines of code to set up, and therefore is much, much faster than having to run through an entire for loop. Again, it also happens entirely in the background, without the CPU's involvement, which leaves us free to do whatever we want while it's busy.

To summarise: One of the biggest advantages of DMA is it frees up the CPU to do other work while large data transfers are happening.

Using DMA on the PIC32MZ

The PIC32MZ has eight of these DMA channels, and each of these can transfer up to 64kB at a time. It runs directly off of the System Clock (SYSCLK). There are also advanced features like chaining channels together, pattern matching and CRC generation. Today we're going to look at how to set up DMA transfers and use pattern matching too.

For starters, let's see what information we need to give the DMA controller:

In theory, it's very simple but this is the PIC32MZ. It takes your cute "theory" and laughs at it before ripping out your heart and laughing at you. There are many things the documentation either doesn't mention or describes very poorly. The most important of them is this:

Coherent? The memory on the PIC32 is a bit slow and peripherals use various tricks, like caching or making their own copies of data, to get better speed. The problem with this is that two devices accessing the same area of memory can end up reading different values from the same memory location due to this. In DMA, this would lead to disaster. The coherent memory space is one in which no caching or tricks are allowed and everything accesses the memory directly. This means it's slower but more reliable.

If you look in any Harmony example that use DMA, they declare their buffers like this:

It turns out that APP_MAKE_BUFFER_DMA_READY is a friendly way of saying:

Which tells the compiler to assign the array in coherent memory. So, where before you had to declare your buffer like this:

It looks confusing but it's not a huge change. Please remember that the 16 is the number of bits, so for an unsigned char you'd need to change that to 8.

If you prefer using heap memory and malloc() and free() the coherent memory version of those are __pic32_alloc_coherent() and __pic32_free_coherent().
Remember though, if you use heap memory that you need to specify a heap size under XC32 compiler options or it will not work.

OK, enough theory for now, let's take a look at some code to send a 16-bit buffer to the PMP:

Important: Before continuing, I want to mention again that this can transfer a maximum of 65,536 bytes. This means is cannot transfer an entire 320x240x2 bytes frame of data at one time. That can be accomplished by DMA chaining or interrupt handling, neither of which I am going into today.

There are a few new things here. First of all, what is virt_to_phys? Then what's this IRQ-related stuff? Well, virt_to_phys is the name I copied from the datasheet. Let's take a look at what it does:

Virtual vs Physical memory. To put it very simply, the PIC32 takes the physical memory and maps it into segments (like KSEG0, KSEG1, etc) some of which are cachable and some of which are not. It uses something called Fixed Mapping Translation (FMT) to translate these addresses to the actual physical memory location when they are used. The DMA module requires the actual physical address of the memory used, so we need to translate the pic32's virtual memory address into a physical address, which is what virt_to_phys() does.

The next thing you'll not is we have to supply a "source" interrupt for the DMA transfers. If you remember from the LCD example, in PMP_init() I had this line:

This means that after any PMP transfers is completed an interrupt will be generated. We do not need to write the Interrupt Service Routine (ISR) for this, it's all handled internally and the DMA module will intercept the interrupt and clear the interrupt flag for us each time.
There is also the option to abort the DMA transfer if the PMP error interrupt is generated, that's what _PMP_ERROR_VECTOR is doing.
Next, we can see that each DMA channel has a priority, just like interrupts did. This priority is also important in DMA chaining.

A word on interrupts. First, why have I changed to using the Shadow Register Set instead of the software interrupts? Simply put, it's faster because it means the PIC32 doesn't have to save the contents of all the many registers to memory before it calls the interrupt service routine (ISR). Before using this feature, it needs to be enabled, usually somewhere after set_performance_mode() in your main() function like this:

When the DMA transfer is done, it can generate an interrupt to let us know it's done. Knowing what we know about ISRs and how they take valuable time, you may be tempted to do this:

However, this would be a big mistake. In the DMA datasheet in a code example they say:
" continuously polling the DMA controller in a tight loop would affect the performance of the DMA transfer "
You could check the flag, wait a few microseconds and check again but I prefer to use the interrupt approach as, in theory, it could result in better turn-around times. There are 8 different kinds of interrupts that can be generated which makes the DMA module very flexible.

Can't we do something to shorten that horrendous ISR declaration? Turns out yes, we can. Somewhere in your code, you can define:
#pragma interrupt DMA0_handler IPL3SRS vector _DMA0_VECTOR
and then later in your code, for the actual ISR function, you can just say:
void DMA0_handler(void)
Which is quite a nice change from that mess up above. All a matter of personal preference, really.

The last thing I want to take a look at today is a really cool ability of the DMA module called "Pattern Matching". This is a way to abort a DMA transfer upon receiving a certain byte / word. This pattern can be either 8 or 16 bits.
This is very useful in reading from SD cards, because before we read a block we have to output 0xFF until the SD card returns the 0xFE token to tell us it's ready to give us the data. You can set up a pattern match like this:

Right, that's long enough for one day. Next time I'll write about how you can use two DMA channels to read from an SD card.